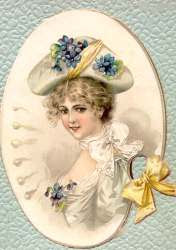 I had lunch today with my Dad and Grandma. She is 94 years young! She is such an amazing person. Just imagine all the changes she has seen in 94 years on this earth. She was born in 1912, a month after the sinking of the Titanic. She never knew her father, he was killed on Christmas Eve 1911, a train struck him as he walked a railroad trestle. He was on his way home with the family Christmas tree. When she was 15 months old, her brothers accidentally set her on fire when they were playing with matches. She was burned over 70 percent of her body. When the neighbor saw the fire and got to her all that was left of her dress was the binding around her neck. It is a miracle that she survived this back when medical treatment was so far behind what we have now. She said that for almost a year, she was suspended in a makeshift bed of a sheet tied to four chairs so that she was suspended so that air could circulate around her body. She had to learn to walk all over again. Imagine the anguish of my poor great grandmother having her husband die before their last child was born, then having that child almost die in another freak accident? Grandma is a fighter and a survior. She did something in the 1930's that very few women did. She filed for divorce from my Grandfather. He was no longer coming home at nights and when he did he was drunk. She finally found him, in the arms of another woman, and made him leave the house. Their child, my dad, was only 3 years old. Again she survived. She went to work, her sister moved in with her and they raised my Dad themselves. When my Dad was 13 years old, my grandmother remarried a man named Roy. He and my Dad did not have a real good relationship, but got along for the sake of Grandma. However, Roy, was really the only grandfather I ever knew. He was the perfect Grandpa. He was a farmer and a guard at the prison that bordered their farm. Grandma was very happy for 47 years, when Roy died from a massive heart attack. She then moved back to town to be closer to her family. She still keeps house for herself, and has the best lawn on the block. She is still active in church and keeps tabs on all her grandchildren and great grandchildern. One day she will leave some pretty big shoes to fill. I dread that day.
Posted by LBP at 12:03 PM 5 comments:

I found this picture on the familyfun.com website. I am thinking that this would be a great craft to make for the girls at work, and some of my friends. Even though I will probably make mine a little more, what is the word I am looking for, maybe creative, yeah I want mine more creatively decorated! Geez, I'm thinking Easter crafts already!