Each Friday Kelli at http://kellishouse.blogspot.com/ hosts Show and Tell.
I hope my post today doesn't offend anyone. It is not meant to, this is a very sentimental gift from my Grandma.
My Grandma grew up in a very poor family. Her father had died 5 months before she was born and her mother took in wash to provide for the family. One December when she was about 4-5 years old, the church she attended held a Christmas party for the "poor" in their community and had Santa had out gifts to the children. When she opened her gift, she found this doll. 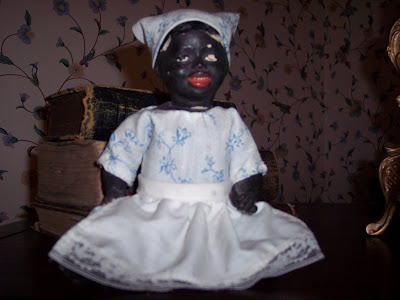 She was so happy because she had never had a "store bought" doll before. Right after Chrismas some friends came over to play with Grandma and made fun of her because she had a black doll. She said it had never occured to her that there was anything wrong with having a black doll but these girls kept laughing about it and making fun of her so she took a box and put the doll in it and buried it out behind the house. She told everyone she gave it away. She was so sad but couldn't stand the taunting she got from the other girls. 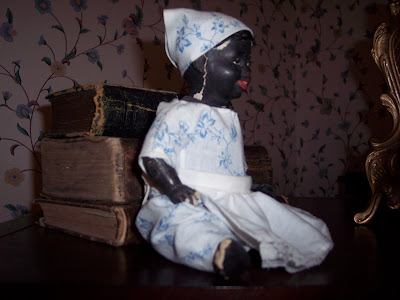 When she was a teenager, she remembered the doll and she and her sister went out back and started digging. It took them a while but they finally found the doll! She put the doll in her trunk and there it stayed for decades. She finally showed it to me one year and told me her story. I asked how the doll got so cracked and broken, and she said the doll was used before she got it and I guess just age and heat made it worse. Anyway, the year I graduated from high school my Grandmother gave me this doll. It was stark naked so I made her this little dress. She has been proudly gracing the top of my entertainment center for over 20 years now. I wouldn't take any amount of money for her. 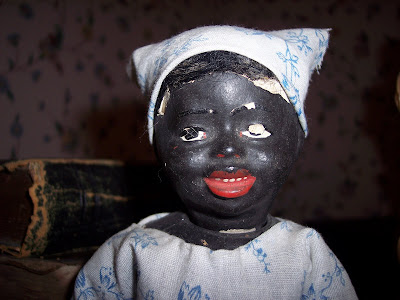 I think she is a beautiful doll with a sad story.
Wishing everyone a wonderful weekend.
Blessings
Linda
Posted by LBP at 8:03 AM

WHat a story. It just reminds me that there are so many times that we let 'what others think' make us put away things that are important to us!

Wow. What a story. Can't believe she found it after burying it. The doll has been through a lot. Hang on to it. Be sure to pass along too. :)

For your daily dose of vintage goodness & a bit of silliness, stop by Confessions of an Apron Queen

That is a sad story. I'm so glad you have the doll and the story behind it. Kids in their youth can be cruel at times and then regret it later. Thanks for sharing.

What a wonderful doll and a very sad story. It tells so much about our society. I am proud of your grandmother digging it back up and then presenting it to you. It would certainly have a place of honor in my home, too. Glad you put some clothes on her :o)
Susan

I am glad she found the doll again and that it is a treasure to you now. I love the clothes you made for it.

What an amazing story. No wonder you treasure her. I've always loved black figurines and dolls.

She is absolutely beautiful. Thank you for a heartwarming story, but sad, as you say, that there was that kind of prejudice that made it go that way. I'm so glad you have it.
thank you for your comment on the lavender. If I had lots of it like you do, I might make a tea, using just the flowers, and try that for a spray. You wouldn't have to dry them first. I'm going to try that with my lemon balm - I have so much of it this year.
Nancy

I love that story. How fortunate that you found her again and now can treasure her.

Linda - Behind My Red Door said...

What an endearing story. How sad your grandmothe must have been to want to hide her beloved doll. Thanks for sharing!

Oh my goodness...this whole story brought tears to my eyes!!! Wow....how amazing is this?!!! I loved it...I loved the show and tell a whole lot!!! Wonderful

A wonderful treasure of a doll!, with a meaningful and thought-provoking story behind it!
Thanks so much for sharing it and making my day enriched by it!
Blessings to you!
Claudia O.

I'm glad to know that you have your grandmother's beautiful doll and that she shared the story with you. Thank you also for sharing with me about your grandmother. I'm sending hugs her way and keeping her in my prayers.

Thanks for sharing this story. I had a doll with a head that split like that. I think they were made out of some sawdust and plaster. Also, I had a baby doll that was african american when I was about 5 years old. We would go to see my grandparents in Georgia and pass through lots of little towns where I would see Black children playing. I asked Santa for a little baby like the ones I saw there. I really loved that doll.
Mama Bear

What a beautiful story, I am so thankful you shared your story today. I know you will care for her and cherish her as long as you have her. There may be someone who could help restore her or help preserve her better, have you looked into that?

I loved reading your story about the doll! Sad story but a nice ending!

I'm glad you stopped by my blog today! Nice to meet you! :)

What a sad story! But what a great ending - that she was able to find it, and that you have it.

My DIL is from Kenya, and my granddaughter always called her "chocolate" when she first began talking. So cute.

Thanks for stopping by today - the twins definitely have kissable cheeks! And they get lots of kisses!

And I'm afraid you're right about cat eye glasses coming back - but not on this face!

That is just priceless! Thanks for sharing it!

Oh those silly, mean girls - I'm so glad to know that this precious dolly has known nothing but love for such a long time *s*

What a wonderful show and tell, Linda. How awful that those girls made fun of your Grandma. She must have been very sad when she buried her special doll. I'm glad you have her now and take such good care of her!
~Kelli

I loved this story Linda. So glad you have the doll and the special memories that your Grandma shared with you about her.

How sad that prejudice should extend even to dolls - sadly that says a lot about children having a blinkered upbringing. I think she is enchanting and it's good to hear that she has a happy home with you now.

Linda, she is a very special doll with a very touching story. I'm sure your grandmother gave it to you because she knew that you would cherish it as she did.
Aloha!

Oh this breaks my heart for that little girl so long ago. It also makes me so happy for you. What a treasure! Thank you for sharing this beautiful story.
Dee (www.Xanga.com/GraceatHome)

That's a beautiful memory. I'm sure your grandmother would be proud to know you've placed her doll in a place of honor in your home.

What a touching story! Love it. Thanks for sharing.

I have another sentimental story about a grandmother who sewed dolls and toys for her grandchildren. It's a children's book called "Great Grandma's Gifts". Available at Amazon.